Sign up to receive emails from Carnegie’s Africa Program!
Check your email for details on your request.
After a two-year hiatus due to the coronavirus pandemic, the Mobile World Congress (MWC22) was held in March in Barcelona. This year’s conference tag line, “connectivity unleashed,” showcased the power and possibilities of 5G through virtual reality, metaverse, and AI-related applications. Beyond the exciting experiential moments that these technological displays provided, they also pointed to the realities of the digital divide.
Digital connectivity is enriching the human experience—but only for those who are connected. The International Telecommunication Union indicates that 2.9 billion people globally remain offline, around 37 percent of the world’s population. In Africa in 2021, only 33 percent of the population was using the internet, meaning an estimated 871 million people are not realizing digital dividends. To this population, the power of information and communications technologies to connect; to deliver goods and services in healthcare, education, finance, commerce, governance, and agriculture; to ease communication; and to share information cannot be actualized, and neither can their economies harness the power of technologies as a driver for economic growth and innovation.
In acknowledging these realities, policy discussions at the conference called for a rethink of current approaches to Africa’s digital divide, in particular a more nuanced framing of connectivity, and for urgent policy action to bridge the digital divide. What might this rethink of the digital divide entail, and what policy shifts are needed?
Data from the GSMA show two connectivity gaps: a coverage gap (meaning unconnected populations live in an area not covered by mobile broadband) and a usage gap (meaning they live within the footprint of a mobile broadband network but are not using mobile internet services).
The global coverage gap stands at 6 percent, with the largest gap, in sub-Saharan Africa, at 19 percent. Despite this statistic, the region has seen a marked reduction in the coverage gap, down from 51 percent in 2014 (see figure 1). This shows that efforts made by various stakeholders to address Africa’s coverage gap are bearing fruit. 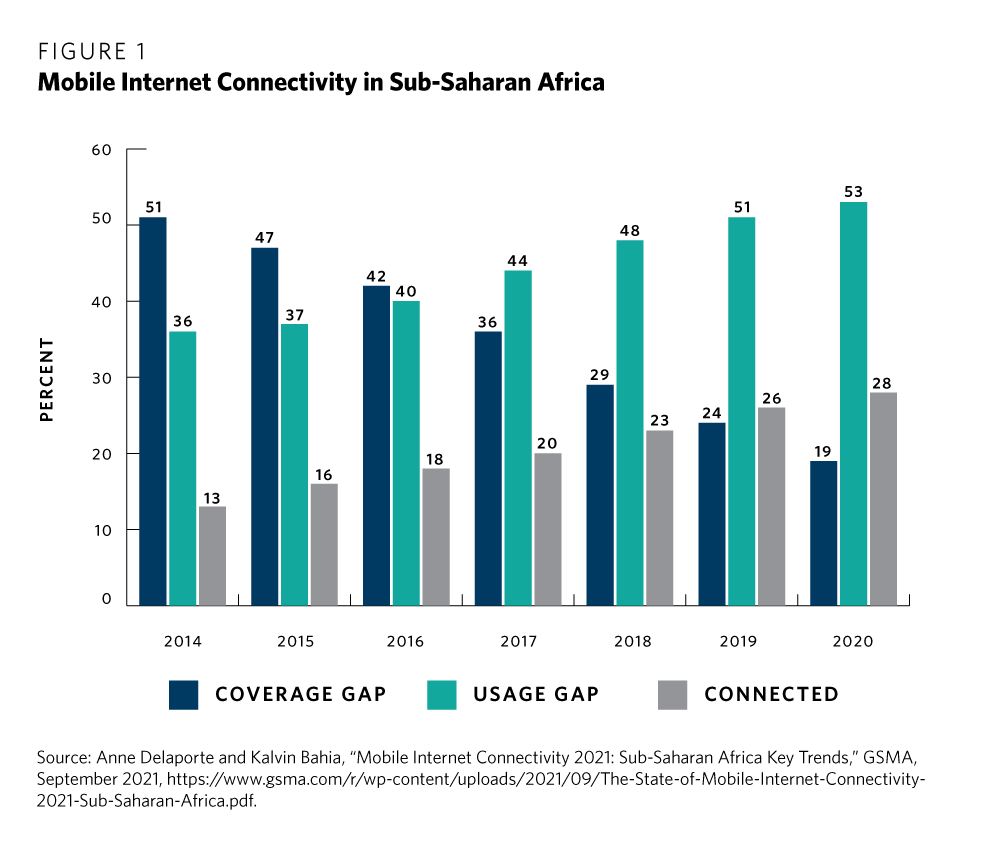 Investments by governments, industry players, and development partners have helped African nations acquire mobile technology infrastructure and led to the reduction of the coverage gap. These initiatives have enabled many Africans to live within reach of a mobile cellular signal. For example, Rwanda’s partnership with one of South Korea’s largest telecoms providers, KT Corporation (formerly Korea Telecom), helped Rwanda achieve over 97 percent 4G mobile coverage by 2020. More recently, Kenya’s Safaricom and its parent companies Vodafone Group Plc and Vodacom Group Limited have embarked on a project to build a new mobile network in Ethiopia backed by a $500 million investment from the U.S. International Development Finance Corporation.
Africa’s gains in reducing the coverage gap have not translated to a reduction in the usage gap. Instead, there has been an incremental increase in the usage gap. Despite the increased internet penetration in Africa, the usage gap has widened from 36 percent in 2014 to 53 percent in 2020 (see figure 1). The number of Africans who live within the footprint of a mobile broadband network but are not using mobile internet service has increased, signaling that policymakers and stakeholders need to rethink universal access policies to factor in the emerging variation. Thankfully, there is evidence about the unconnected and the usage gap that supplies insights on the required policy shifts and points to socioeconomic factors.
Africa lags in internet connection compared to global averages among youth, women, and those in rural areas (see figure 2). 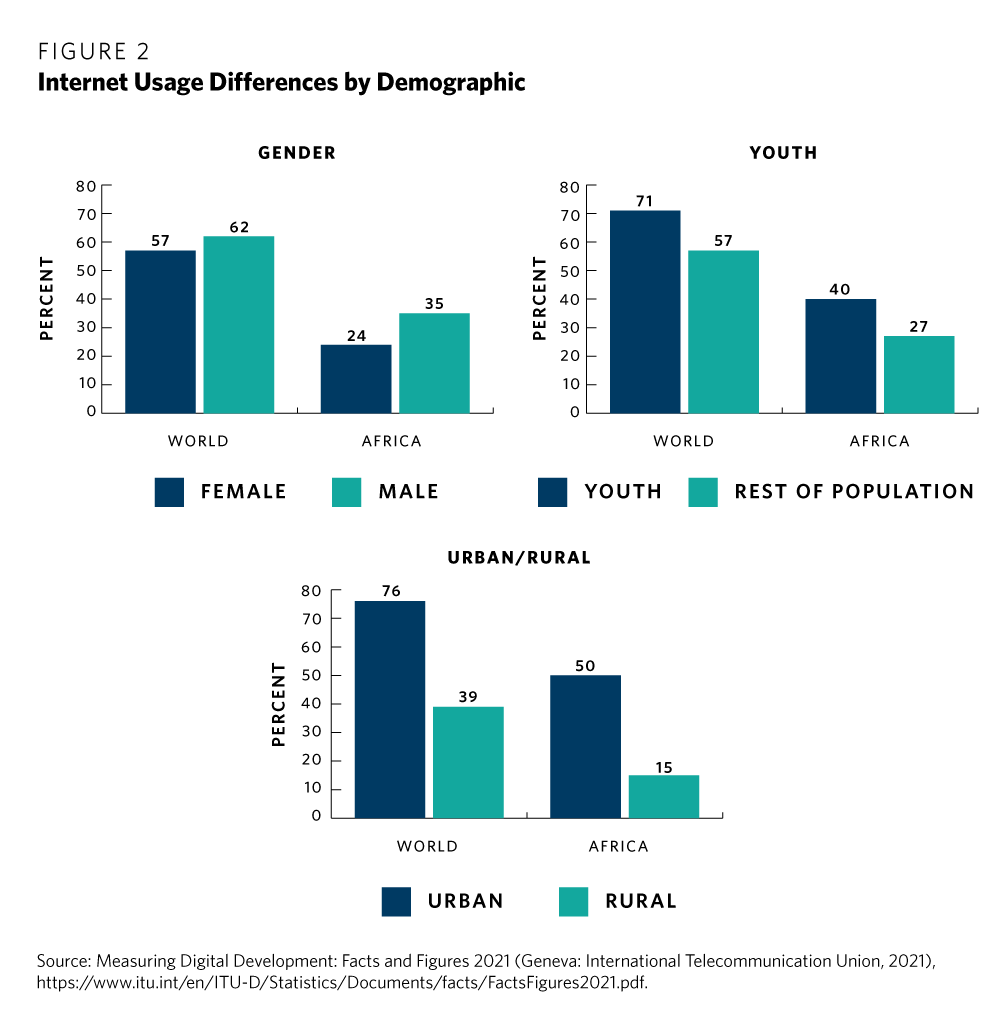 These parities are supported by GSMA data, which show that there are five overarching barriers to mobile internet adoption use: access to networks (and enablers such as electricity and formal identification), knowledge and skills, relevance of content, safety and security, and affordability of devices and data. And International Telecommunication Union data confirm the existence of a rural-urban and a gender gap and confirm that the cost to connect and digital skills are significant contributors to the usage gap.
Policy discussions at the MWC22 ministerial program highlighted affordability as a key barrier to connectivity, with the lack of affordable devices and data singled out as the main inhibitor. Sub-Saharan Africa was cited as having the highest cost for smartphone devices (see figure 3). For the poorest 20 percent of Africans, the median cost of a basic, internet-enabled device is more than 120 percent of monthly income. For a large population, a smartphone remains out of reach, and some may instead opt for feature phones. In Kenya, the penetration levels of feature phones and smartphones stood at 68 percent and 55 percent, respectively. This also indicates that a large population of Kenyans is limited from accessing a myriad of app-based services. Evidence presented also shows that unaffordability of devices is further compounded by unaffordability of data. Compared to other regions in the world, sub-Saharan Africa has the highest monthly cost, as a percentage of GDP, of one gigabyte of data.
Africa’s persistent digital divide can be explained by socioeconomic factors, with affordability of devices and data being key inhibitors. This serves as an indicator that a policy shift is needed from the predominant coverage gap interventions to more salient macroeconomic issues, especially those that lead to increased, affordable digital devices and data. This calls for a rethinking of universal access and broadband policies and for governments and stakeholders to reframe policies with strategic interventions that mitigate affordability as a key usage gap barrier. 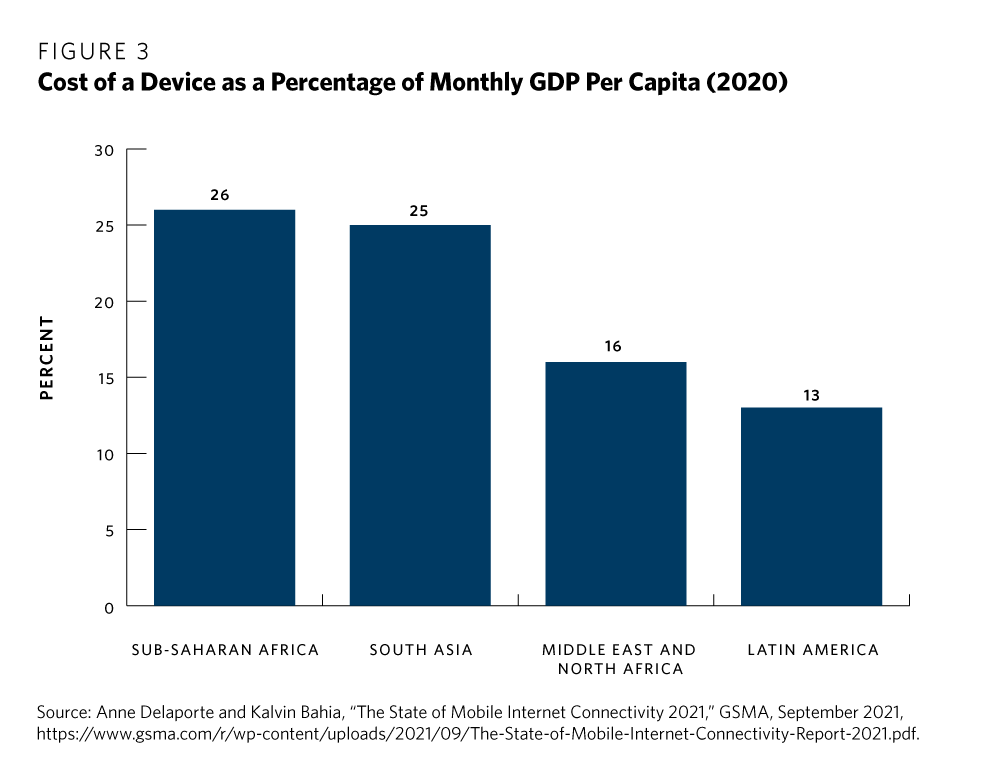 As the usage gap becomes a more salient aspect of Africa’s digital divide, policy action needs to address affordability barriers for both devices and data and to provide policy imperatives that will expand access to mobile phones and data.
The coronavirus pandemic underscored the importance of connectivity and the benefits of remaining connected. Having a mobile phone, for many Africans, became a vital tool for continuity of operations. Mobile money, news updates, vaccination alerts, and school lessons were all transmitted through phones, underscoring the importance of policies that can help put an internet-enabled phone in all African households. The International Telecommunication Union indicates that, in most developing countries, mobile technology is the main way to connect to the internet, making mobile technology a key driver for connectivity across Africa and the engine for Africa’s digital transformation.
MWC22 was indeed a reminder of the power of mobile connectivity and the possibilities and benefits it can help accrue, socially (such as improved access to finance, education, health, and public services) and privately (such as enhanced and easier communication and new forms of play). However, it was also a reminder that the full gains of connectivity can only be unleashed if all people are connected. This demands holistic policy action by all stakeholders, to address both the infrastructure and the socioeconomic barriers that contribute to the digital divide. Alongside investments to build Africa’s infrastructure, there should be parallel investments in initiatives that will lead to an increase in affordable digital devices (such as smartphones) and affordable internet.
Carnegie does not take institutional positions on public policy issues; the views represented herein are those of the author(s) and do not necessarily reflect the views of Carnegie, its staff, or its trustees.
The World Unpacked is a biweekly foreign policy podcast that breaks down the hottest global issues of today with experts, journalists, and policymakers who can explain what is happening, why it matters, and where we go from here.
1779 Massachusetts Avenue NW
Washington, DC 20036-2103
Phone: 202 483 7600
Fax: 202 483 1840
In a complex, changing, and increasingly contested world, the Carnegie Endowment helps countries take on the most difficult global problems and safeguard peace and security through independent analysis, strategic ideas, support for diplomacy, and training the next generation of international scholar-practitioners.
© 2022 Carnegie Endowment for International Peace. All rights reserved.
By using this website, you agree to our cookie policy.
You are leaving the website for the Carnegie-Tsinghua Center for Global Policy and entering a website for another of Carnegie’s global centers.
你将离开清华—卡内基中心网站，进入卡内基其他全球中心的网站。

Copyright © HT Media Limited All rights reserved. The iPhone 14 Pro and iPhone 14 Pro Max are wooing customers this year with one small

The Rockefeller Foundation is collaborating on a new mobile health pilot program to reach underserved populations.Gumla, India | October 1, 2022 ― In order to