The NHL Is Using Technology to Bolster Its Fan Experience – SportTechie

Thanks to a collaboration from Verizon, SMT, Immersiv.io and Apple, a fan can enjoy player and puck tracking on a mobile phone, with accompanying AR graphics.
NEWARK, NJ — An iPhone rested on a tripod in front of Suite 225, pointed toward the ice where one could tap any of the Devils or Sabres skating in the Prudential Center last Thursday night and see just how fast they were moving. Shot speeds, time on ice and heat maps were easily accessible, too, all with barely perceptible latency.
This particular activation pulled tracking data from the players and puck and layered augmented reality graphics on top of the video—all part of a collaboration from Verizon (5G ultrawideband network), SMT (NHL Edge tracking system), Immersiv.io (sports AR company) and Apple (the device).
Verizon Multi-View enabled users to select up to seven live video angles for immediate replays, some of them showing a 10K feed from C360 Technologies. On the scoreboards for all fans were automated replays from WSC Sports and more tracking data from SMT.
All of this was on display for media and league partners—and in varying degrees of public accessibility—as part of the NHL’s Technology Showcase, at which SportTechie was among the select group of invited reporters. The event emphasized the work being done to bolster the fan experience and, in particular, those aforementioned features available only to those in the venue.
“The people who pay the most to come see our game should get the best possible experience,” says NHL EVP of business development and innovation Dave Lehanski. “There is nothing that anybody in that venue should think about that they don’t have, that they could get if they were home or elsewhere.” 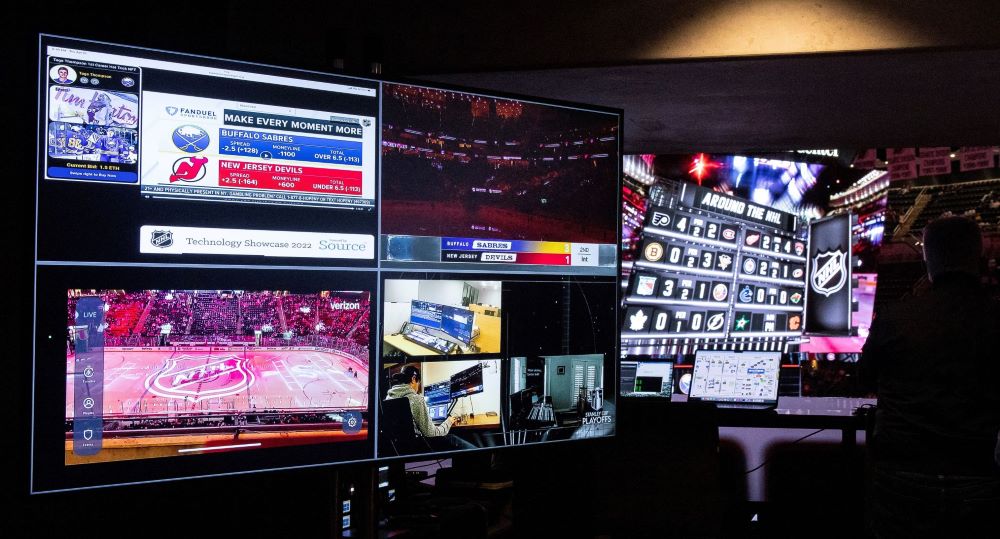 From betting to puck and player tracking, the NHL is creating an immersive experience for fans at both the arena and on their couch. 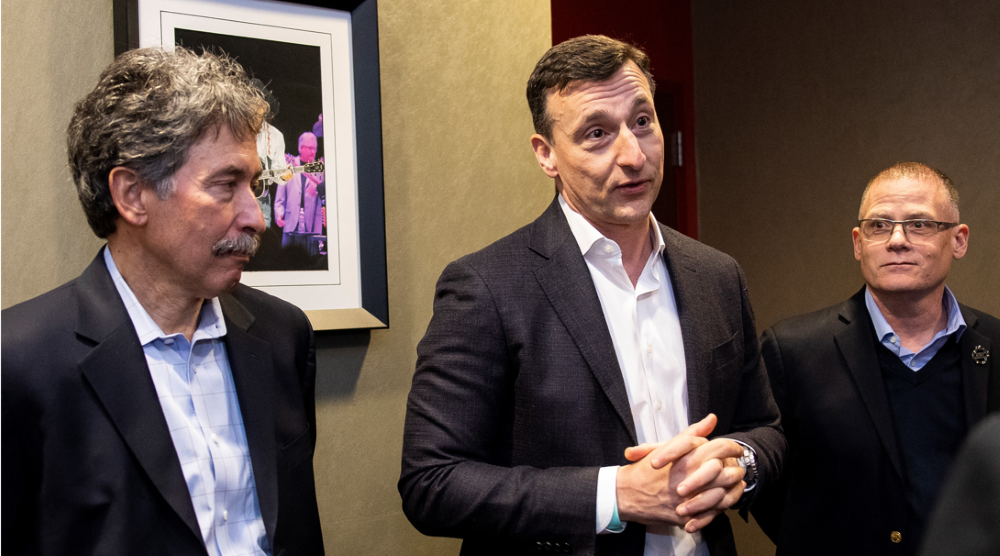 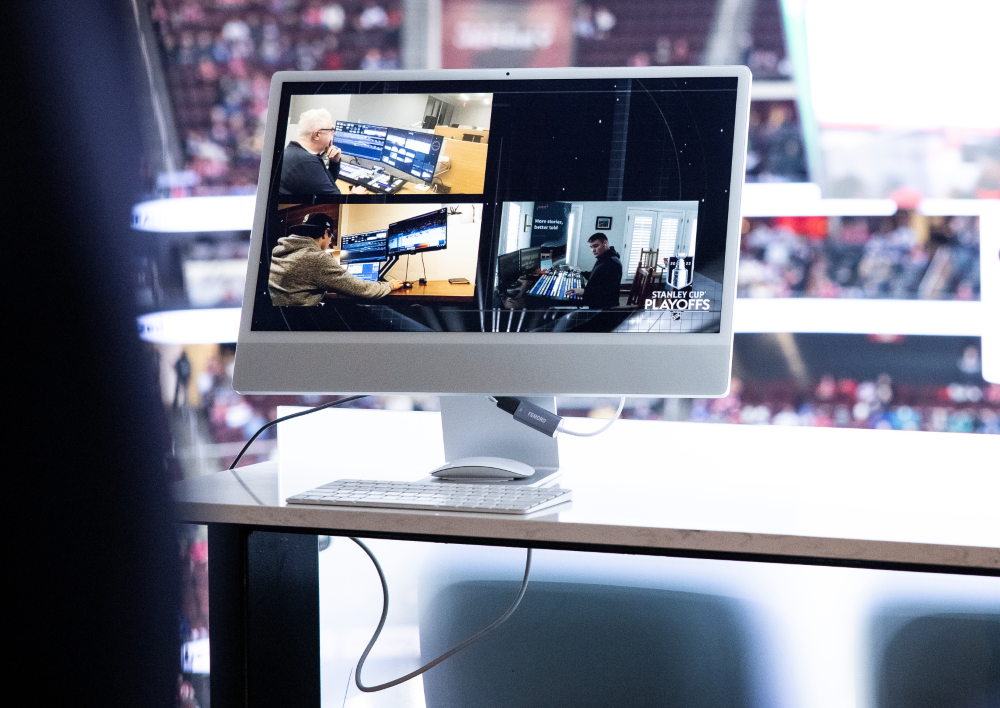 At-Home Broadcasts
Along with major broadcast partners Rogers, ESPN and Turner, the NHL continues to upgrade its at-home viewing, as well. The league hopes to make SAP’s iPad Coaching Insights app—which has evolved considerably since its launch in January 2019 and recently added more video feeds—available to broadcasters are soon as the upcoming playoffs.
“The opportunity that we have in the next couple of years is taking all this data and creating insights [to] make the game a lot more relevant,” NHL CTO Peter DelGiacco says, “with better stories and be a lot more entertaining for all fans, not just the hardcore people, but also give better insights [for casual fans].”
On the back end of linear production, VizRT is showing how efficient the process can be. There is no longer the same need for big production trucks and larger staffs. Last week, VizRT produced its own feed of the game with only three disparate producers—one at NHL HQ, one in his Toronto home and one at a house along Hermosa Beach. At one moment, VizRT head of sports Kevin Bovet started streaming the game from his phone, which the producers could instantly incorporate into the broadcast, demonstrating the flexible tools in the cloud. “We really believe that is the future of the production,” Bovet says, “but what we want to do here is prove that it’s available today.”
For streaming, Source Digital showcased a pair of feeds with graphical overlays for fans of differing interest. Through self-selected features and machine learning, fans can choose to personalize their own experience or follow along through certain templates, such as a betting-focused feed or one for a social watch party. Given the price point of an out-of-market NHL.TV subscription, it’s particularly imperative to cater more functionality for that demographic, Lehanski says. “Streaming definitely caters more to levels of avidity from a fan base.” 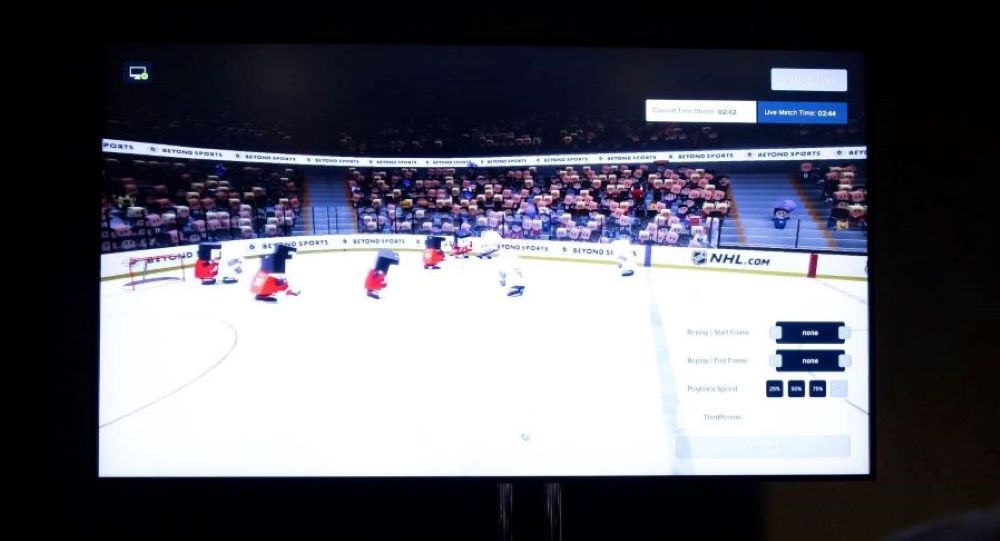 In the Metaverse
On a large screen in corner suite 234, animated block characters skated across a digitally rendered rink, mirroring the actions of the players on the ice. Beyond Sports was taking the tracking data and visualizing it as an animated program. Illustrations of fireworks accompanied goals. Paired with that 2D representation was a virtual reality headset which could take fans into an immersive version of the same.
“We can make characters look like anything you want—it doesn’t have to be realistic,” says Beyond Sports CTO and co-founder Nicolaas Westerhof. “It can be a fun character, in this case aimed especially at the kids. The younger generation are just not as engaged anymore with watching television in the linear way. They’re not sitting on the couch watching TV for three hours watching the game, so what we’re trying to do is we’re trying to make it more fun for them.”
At the NHL tech showcase in Las Vegas, Beyond Sports exclusively used the VR platform, creating a virtual replica of the arena and allowing fans to control their viewpoint. Their invitation this time, Lehanski says, was largely predicated on their 2D adaptation and ability to convert data into virtual experiences that portend metaverse integrations.
Web3 remains an area in which all leagues have considerable room for strategy development. But Lehanski hinted at another partnership to be announced soon in this space and discussed the need to lay down a foundation for future work.
“When you think about Web3, Metaverse, these new environments and how we can start as a league to get integrated into those spaces and those environments,” he says, “once you look at that, you’ll be like, ‘I get it.’ If you’ve got a kid and you’ve ever seen Roblox or Fortnite or any of these things, you’ll be like, ‘I could see, as crazy as it might be, my avatars running up the snowy mountain and when it gets to the top, there’s a rink and there’s the Winter Classic, right?’”

Photo credits: NHL (all photos)
No one is projecting Iowa State running back Breece Hall to be a top pick in Thursday night's NFL Draft, but Next Gen Stats' machine learning models believe everyone should think again.
Caden Clark has used STATSports to track his speed, overcome injury, monitor heart rate and help him run as efficiently in the 90th minute as he does in the first.
To protect everyone from the front office to fans before, during and after every NFL game, event and activation – especially at major tentpole events like the Super Bowl and NFL Draft – the league continues to work with and rely on trusted partners like Cisco for their solutions and expertise on network security.
Originally a sports science firm that analyzed blood biomarkers, Orreco has designed @thlete to centralize an athlete’s data, performance, health and wellbeing history—while also providing AI-powered recommendations on how to keep them excelling.
Whether it’s for Apple TV+’s MLB streams or for micro-betting, nVenue’s in-the-moment probabilities—as part of its NextPlay product—are gaining notoriety in the sports and gaming world.

Copyright © HT Media Limited All rights reserved. With the festive season in full swing, your smartphone’s camera has to do overtime. After all, it

JavaScript must be enabled in order for you to use the Site in standard view. However, it seems JavaScript is either disabled or not supported

PrevPreviousOnePlus is set to deliver “More Power to You” and you can watch it live! – The Indian Express
NextRising Trend of Mobile Soil Testing to Boost Soil Analysis Technology Market across Agriculture-dominant Regions, Evaluates Fact.MR – GlobeNewswireNext