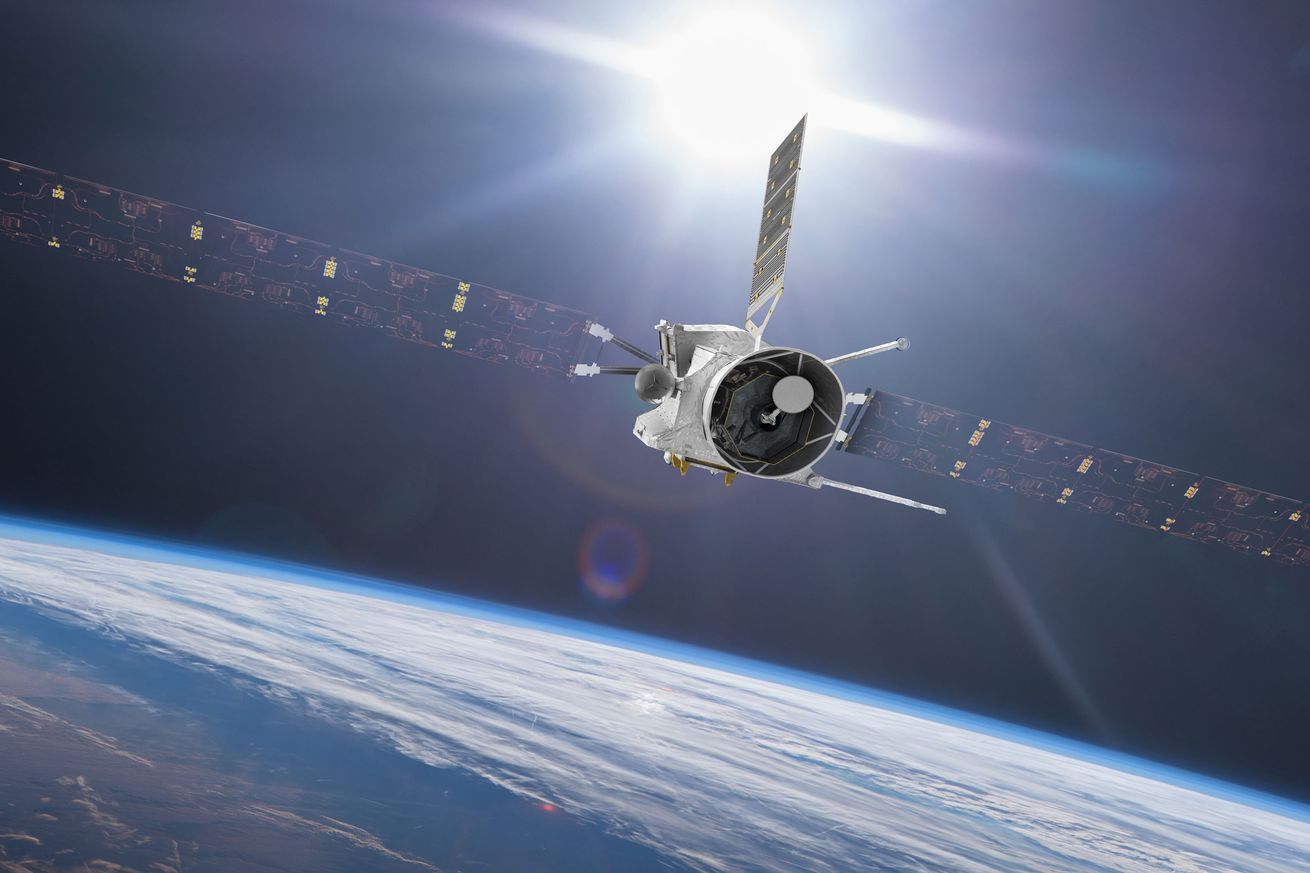 An artistic rendering of BepiColombo as it swings by Earth. | Image: ESA / ATG medialab

On Friday, an interplanetary spacecraft will slingshot around Earth in the super early morning hours. The spacecraft, a joint European and Japanese creation, will use our planet’s gravity to brake its speed and change its course through the Solar System, putting itself on track to reach Mercury in the next five years.

The probe whipping by our planet is called BepiColombo, which is actually two spacecraft wrapped into one package. One spacecraft, designed and operated by the European Space Agency, is equipped with 11 instruments to study Mercury from the planet’s orbit. The second comes from the Japanese Aerospace Exploration Agency (JAXA), and it’s designed to study Mercury while spinning in orbit. Once they reach Mercury, the two spacecraft will break apart and revolve around the planet on their own, studying the world’s exterior and its inner core.

Before all that can happen, BepiColombo needs to make it to Mercury. Launched in October 2018, BepiColombo’s route to the planet is set to last a total of seven years, and a lot of that time is spent slowing down. Because Mercury is so close to the Sun, spacecraft that travel toward the planet are constantly being tugged by our Solar System’s star, causing them to speed up. BepiColombo has to repeatedly put on the brakes to make sure it doesn’t go barreling into the Sun.

The probe is equipped with ion thrusters for maneuvering, but those won’t be enough to slow BepiColombo down to the speeds it needs to reach to get into Mercury’s orbit. “It’s very prohibitive to do this with fuel that you [load] on the spacecraft,” Elsa Montagnon, a spacecraft operations manager for ESA’s BepiColombo mission tells The Verge, noting you’d need a lot of fuel to slow the spacecraft. Montagnon, who is responsible for the flyby, and the mission engineers have turned to the planets for help. “We have developed a strategy where we do planetary flybys, so we will use the energy of the planets to slow down the spacecraft,” she says. BepiColombo is set to swing by Earth and then by Venus twice before doing six flybys of Mercury. That all should be enough to get the dueling probes into orbit around the tiny planet.

As BepiColombo swings by Earth — around 12:25AM ET on April 10th — it’ll use the gravity of the planet to shift the vehicle’s speed and alter its trajectory toward the inner Solar System. The spacecraft will come within nearly 7,900 miles (12,700 kilometers) of Earth. During that time, many of the instruments on the probes will be gathering data. Some onboard cameras will take photographs, with engineers hoping to get a full sequence of images as BepiColombo approaches and then leaves the Earth.

Enthusiasts on the ground might be able to see the slingshotting spacecraft, too. As BepiColombo gets closer to Earth, it will brighten and become visible to those with telescopes or even binoculars and cameras. The ESA has details about how to spot the vehicles overhead. Anyone who manages to snap a picture of BepiColombo can submit it online as part of a contest. “This will be really awesome for us and very nice for us to get pictures of the spacecraft as it says goodbye to the Earth for the last time,” says Montagnon.THE FLYBY COMES AT A STRANGE TIME AS MOST PEOPLE ARE SHELTERING IN PLACE

The flyby comes at a strange time for ESA, JAXA, and the rest of the world, as most people are sheltering in place to stop the spread of COVID-19. The pandemic has already affected space operations in Europe, with ESA opting to temporarily shut off instruments on some of its deep-space probes to prevent people from having to come into the agency’s mission control center in Germany. ESA even postponed the launch of its Mars rover in part because of travel restrictions put in place to fight the pandemic.

The COVID-19 crisis will have an impact on the BepiColombo flyby, too, albeit a small one, since most of the work needed to prepare for the slingshot is already done. On February 26th, the mission team maneuvered BepiColombo slightly, to put it on track for the flyby, and since then, its path has been pretty stable, according to Montagnon. “Basically all commands that the spacecraft needs for the flyby tomorrow are already up there,” she says. “So in principle, if everything went fine, you would not need us now.”

Of course, engineers know not to be complacent, especially when it comes to interplanetary travel, so people will be on hand at mission control to monitor the event. “We cannot handle this from home, because we need to watch this and be able to react very quickly,” Montagnon says. “This requires direct hands-on access to our operations systems.” A team of eight colleagues will work in shifts at ESA’s European Space Operations Center in Darmstadt, Germany. They will all practice social distancing while on site.“IT’S NOT ALWAYS BEEN COMFORTABLE, BUT IN THE END, WE FINISHED AND NOW EVERYTHING IS IN PLACE.”

Once this flyby is over, BepiColombo will speed toward the inner Solar System. Its next flyby, around Venus, is slated for October 16th this year. Perhaps by then, the team will be able to go back to normal operating procedures. But if not, the mission team has learned how to prepare for these flybys remotely. “In times of anxiety, it forced us to change,” Montagnon says. “I think it’s not always been comfortable, but in the end, we finished and now everything is in place.”