How Much Radiation is Emitted by Popular Smartphones? – Visual Capitalist

Can I share this graphic?
Yes. Visualizations are free to share and post in their original form across the web—even for publishers. Please link back to this page and attribute Visual Capitalist.

When do I need a license?
Licenses are required for some commercial uses, translations, or layout modifications. You can even whitelabel our visualizations. Explore your options.

Smartphones have become an integral part of our everyday lives. From work and school to daily tasks, these handheld devices have brought everything into the palm of our hands.
Most people spend 5-6 hours on their phones each day. And, given that our phones emit a tiny amount of radiation, we’re exposing ourselves to radiation for hours each day.
But different phones emit different amounts of radiation.
With the help of data collected by the German Federal Office of Radiation Protection, we visualize the radiation emissions of some popular smartphones in the market today.
Smartphones and other mobile devices emit tiny amounts of radiofrequency (RF) radiation. Humans can absorb this radiation when the smartphone is being used or is lying dormant anywhere near their bodies.
The parameter used to measure phone radiation emissions is the Specific Absorption Rate (SAR). It is the unit of measurement that represents the quantity of electromagnetic energy absorbed by the body when using a mobile device.
The Council of the European Union has set radiation standards for cell phones at 2.0 watts per kilogram, measured over the 10 grams of tissue that is absorbing the most signal.
SAR values are calculated at the ear (speaking on the phone) and at the body (kept in your pocket). For the purposes of this article, we’ve used the former calculations.
The Motorola Edge has the highest radiation emission with a SAR value of 1.79 watts of radiation per kilogram. That’s significantly higher than most other smartphone models in the market today and close to the limits set by the EU for cellphones.
Coming in second is the Axon 11 5G by ZTE with 1.59, followed by the OnePlus 6T at a close third with 1.55 W/kg. The Sony Experia AX2 Plus with 1.41 and the Google Pixel 3 XL and 3A XL at 1.39 round out the top five.
Here is a look at the 10 smartphones that emit the highest level of radiation: 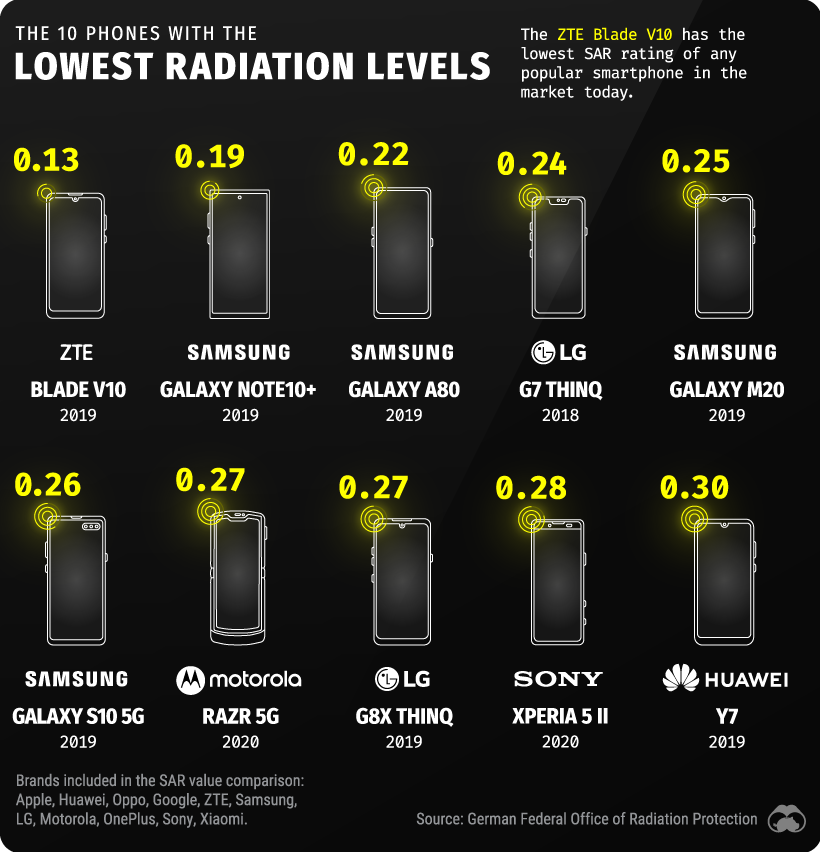 As retailers battle inflation and other economic woes, they must identify the places that are worth big bets, and those that require more reserved strategies.

Hi, what are you looking for?ByPublishedThe Mobile Health (mHealth) market is estimated at USD 55.67 Billion in 2022, registering at a promising CAGR of 10.45%